Lucid Motors has unveiled details of its proprietary, in-house developed electric drivetrain that will power the forthcoming pure-electric luxury Lucid Air the production version of which will be unveiled on September 9 along with available configurations and pricing.

The Lucid Air will have a dual-motor AWD system with 1,080 hp output for quarter-mile times as low as 9.9 seconds on a consistent, repeatable basis. To date, it is the only electric sedan able to achieve a quarter-mile time under 10 seconds. The power of the Lucid Air is complemented by an available extended-range capability that achieves an estimated EPA range of up to 517 miles on a single charge.

Lucid has been able to create powerful, compact, and ultra-efficient permanent magnet electric motors which together with an inverter and an integrated transmission and differential create a state of the art, 900V+ electric drive unit that weighs just 163lb (74kg) and is small enough to fit inside a standard airline carry-on roller bag. Each drive unit packs over 650hp, with a power density that is well beyond anything else offered on the EV market at 41hp per liter. This compactness allows for one, two, or even three units to be used to power a Lucid Air. In total, Lucid's drive units are 45% lighter and up to 59% more powerful than the closest competitor. For their power, the motors are two and a half times more volumetrically compact than the closest competitor. Also notable is the fact that the motors can spin up to 20,000 rpm, a significant performance advantage over the competition.

Lucid has achieved this through a number of innovations, including a new motor winding technology to maximize power output and reduce electrical losses. The motor also features an innovative cooling system that more effectively removes heat from the stator winding, minimizing losses and boosting efficiency. Meanwhile, Lucid leverages a high voltage, silicon-carbide MOSFET system in its inverters to maximize efficiency, especially in real-world driving conditions.

An ultra-high, 900V+ architecture combined with Lucid's Wunderbox onboard charging unit serve as the heart of the Air's electrical platform. The Wunderbox is a unique, multi-function unit, developed entirely in-house to ensure compatibility with, and the maximizing of, charging systems of differing voltages, specifically boost-voltage charging. It also allows the Lucid Air to charge at rates of up to 300 miles in 20 minutes and up to 20 miles in one minute when connected to a DC Fast Charging network (such as those offered by Lucid's charging partner, Electrify America, on its nationwide network). The Wunderbox also enables a wide array of future-ready, bi-directional power delivery features from the vehicle to the grid (V2G) for situations such as managing home power outages. It can also enable vehicle to vehicle charging (V2V). 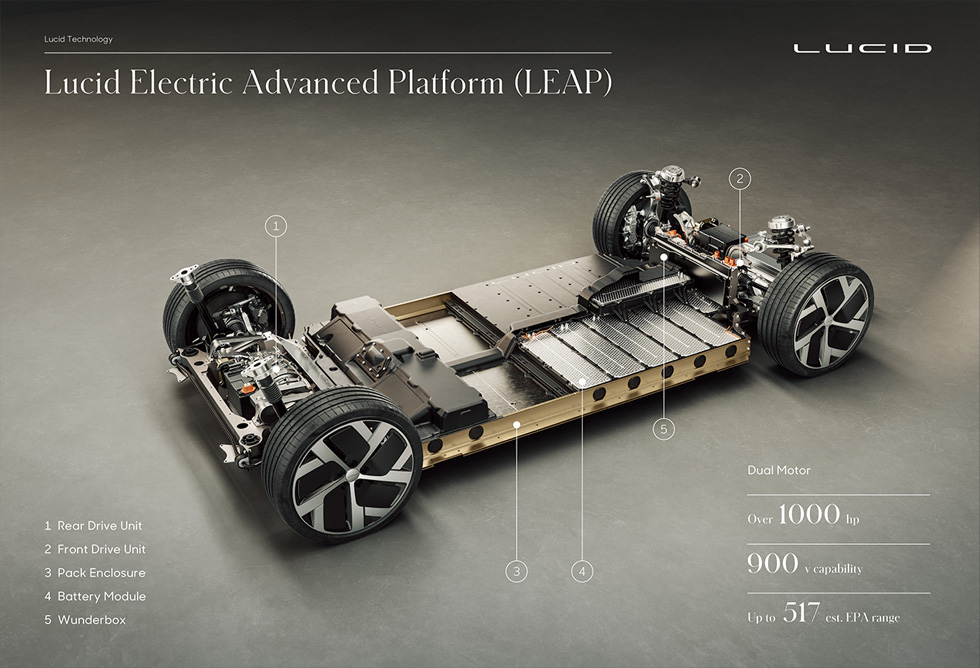 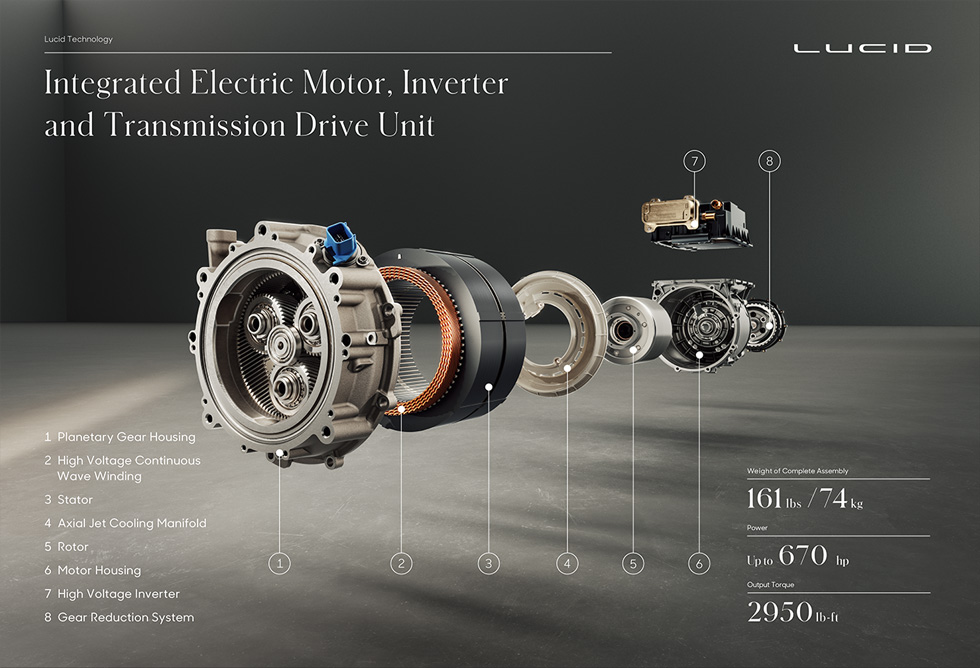 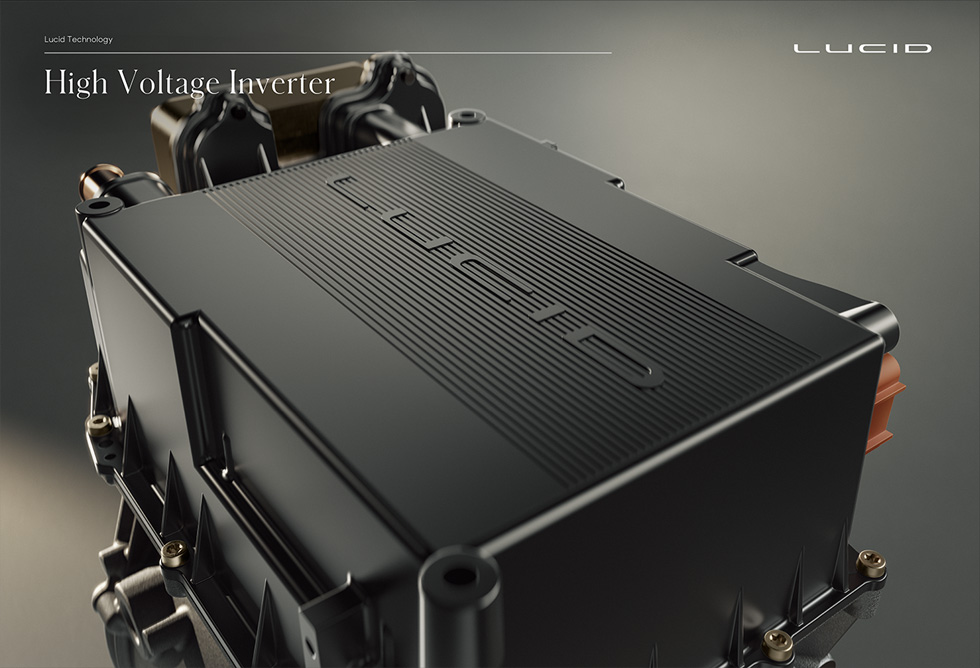 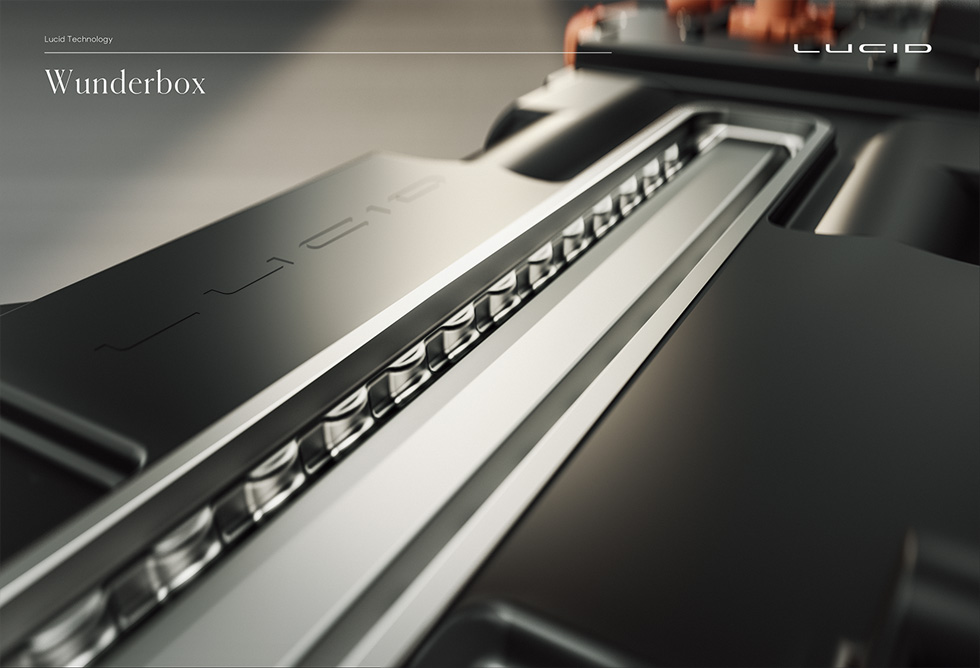 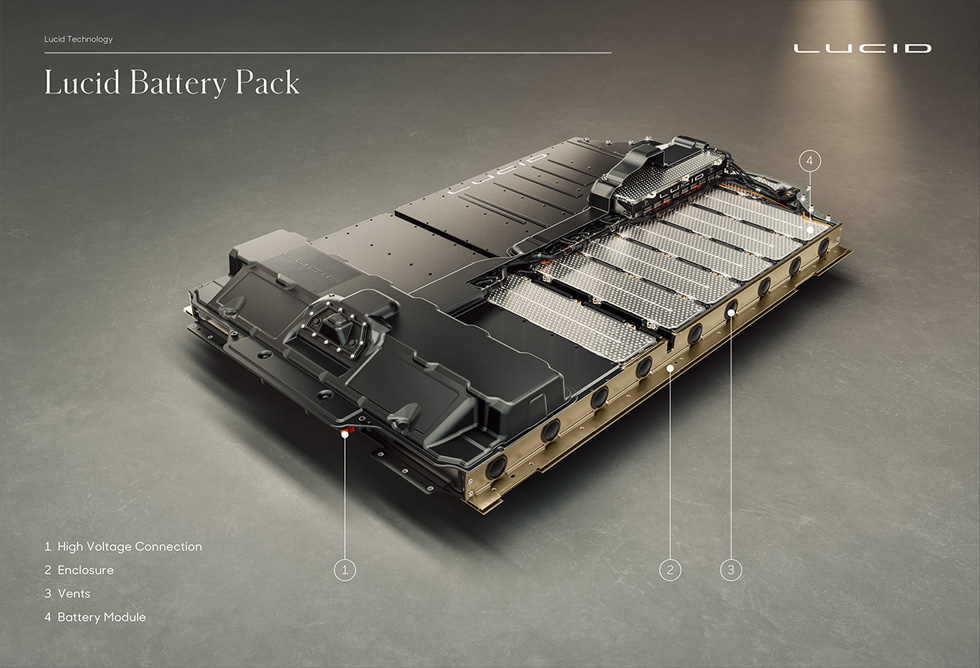 Lucid Motors has finally unveiled the Lucid Air all-electric luxury sedan, as promised. Based on the Lucid Electric Advanced Platform (LEAP) upon which all forthcoming Lucid vehicles will be built, it features Lucid's in-house developed compact and lightwaeight drivetrain. The Lucid Air will have a dual-motor AWD system with 1,080 hp output for quarter-mile times as low as 9.9 seconds on a consistent, repeatable...

Lucid Air pricing and specifications will be unveiled on September 9

Lucid Motors announced that the Lucid Air will be fully unveiled on September 9. The online event will include complete details about the specifications, design, and pricing of the brand's first model. Meanwhile, the company has welcomed more than 160 new members to its team during the past 90 days and is in the phase of a gradual return to its SIlicon Valley headquarters. In addition, the beta prototype fleet has...

The standard versions of Lucid Air will use LG Chem batteries. That was announced earlier by Lucid Motors. Under the agreement, the Korean giant will supply battery cells to Lucid up to 2023. "The agreement with LG Chem puts Lucid on the best possible path to production for the Lucid Air, ensuring the necessary energy density and cell availability to fulfill our promise of class-leading range to consumers," said CEO...

Lucid Motors teases the Lucid Air in a new video

Lucid Motors highlighted the production version of the Lucid Air in a video ahead of the pure-electric sedan's global debut in New York in April. The video unveils the name of the launch edition of the vehicle and some of its key design elements. The Lucid Air Dream Edition is the launch version of the model and will be available in three colors, including a special color only available on Dream Edition cars. The...

Lucid Air is available for reservation in select European countries

Today, Lucid Motors opened the reservations books for its Lucid Air sports sedan in select European countries. For the equivalent of $1,000 USD, customers in Austria, Belgium, Denmark, Finland, France, Germany, Iceland, Italy, Monaco, Netherlands, Norway, Spain, Sweden, and Switzerland will secure their place in line for the Lucid Air. Other markets will be added in the future, including the UK, for which Lucid...

Yesterday, Lucid Motors officially marked the start of the construction of its Casa Grande, Arizona facility together with the Arizona Governor Doug Ducey, the Arizona Commerce Authority, and local officials. This first phase of factory construction will be completed after a year and upon completion, it will be ready to begin the production of Lucid's first car, the Lucid Air luxury sedan. The investment in this...

In September 2018, Lucid Motors received a $1 billion investment from the Saudi Arabia Public Investment Fund (PIF), which will allow it to fund the $240m cost of building the first phase of its factory in Arizona, US. However, this funding needed to be approved by the US government, which caused massive delays. It looks like the final approval has been received because Lucid Motors announced that the construction...

Lucid Motors pondering on building a factory in Saudi Arabia, does not deem Tesla a direct competitor

Lucid Motors has always been deemed as a Tesla rival on home grounds. It announced its Lucid Air sedan at the end of 2016, which is based on the Tesla Model S and starts at $60,000. In September 2018, Lucid Motors received a $1 billion investment from the Saudi Arabia Public Investment Fund (PIF), which will allow it to fund the $240m cost of building the first phase of its factory in Arizona, USA, and Lucid Air's...