In its Q4 and FY2019 update, Tesla unveiled, among other things, that the Tesla Model Y range is increased from 280 miles to 315 miles. Moreover, the production ramp of Model Y began in January 2020, ahead of schedule. According to the Model Y product page on Tesla's website, deliveries are scheduled for March 2020. This is also confirmed in the report, which says: "We will start delivering Model Y vehicles by the end of Q1 2020." The Model Y page on the Tesla website lists only the Model Y Long Range AWD and the Model Y Performance AWD options, both with 315 miles of range, which is probably a mistake. The Performance version should have a lower range.

The Fremont Gigafactory has a combined installed production capacity for Model 3 and Model Y vehicles of 400,000 units per year. The ramp of Model Y will be gradual. After such expansions are done by mid-2020, installed combined Model 3 and Model Y capacity should reach 500,000 units per year. In Shanghai, Tesla plans for Model Y capacity to be at least equivalent to Model 3 capacity. Finally, the first deliveries from the Berlin-Brandenburg Gigafactory are expected in 2021.

Another highlight from the report is the record production and deliveries for Q4. The total production volume is almost 105,000 units and the deliveries mark another record - 112,000 units. For the entire 2019, Tesla has delivered approximately 367,500 vehicles, 50% more than the previous year and in line with its full-year guidance.

Here are some photos from the Model Y body shop at Fremont released by Tesla in its report. 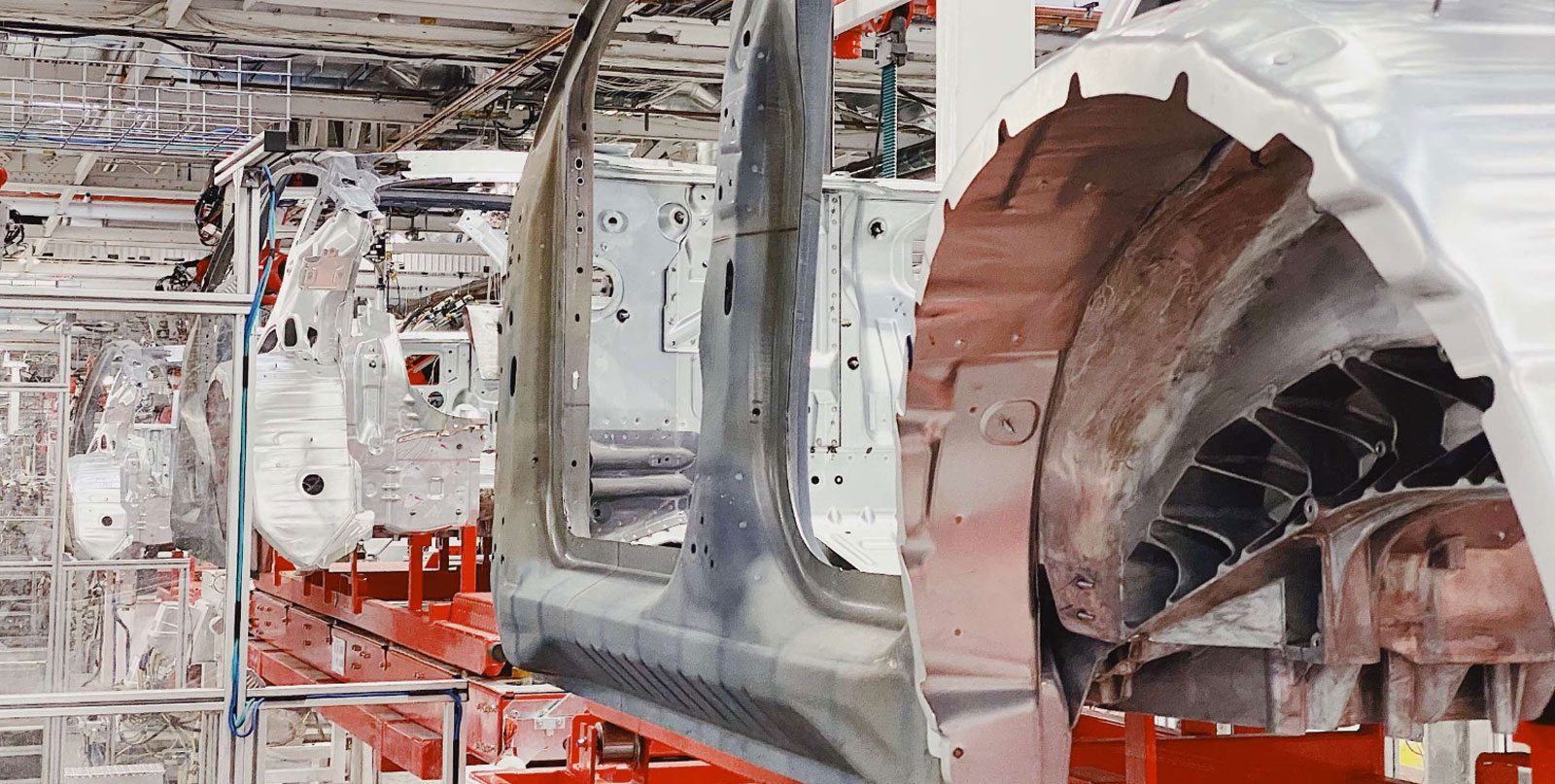 Report: Tesla will no longer use Panasonic batteries for its production in China

According to South Korean news outlet The Guru, Tesla will no longer use Panasonic batteries for its production in China. LG Chem and CATL will be the main suppliers for cylindrical cells for China-made Tesla models. In particular, as the deal with LG Chem expands, LG Chem is expected to emerge as the main supplier to take charge of battery volume for Tesla's Chinese electric vehicle models. This information comes...

South Korean media report that Tesla has asked LG Chem to prepare a report for all carbon dioxide emissions data related to battery production. For sure, acquiring this data is very time-consuming. It includes data from the production and delivery of raw materials to the production and delivery of the end product. This includes data from suppliers. And all this has to be verified. Reportedly, LG has started to...

The General Terms and Conditions between Tesla and Panasonic dating back to October 1, 2014, have been restated and amended. The 2020 GTC, among other things, modifies the term to expire 10 years after Panasonic achieves certain manufacturing milestones. On June 10, 2020, Tesla and Panasonic also entered into the 2020 Pricing Agreement effective as of April 1, 2020 until March 31, 2023, relating to the manufacture...

As of June 15, all North American 2020 Tesla Model S Long Range Plus vehicles have an official EPA range of 402 miles, which is almost a 20% increase in range when compared to a 2019 Model S Long Range with the same battery pack design. Tesla has managed to achieve this increase in several ways: by significantly reducing the mass of the vehicle by using new Tempest 8.5 inch-wide aero wheels and tires by increasing...

Tesla cuts the US prices of Model 3, Model S, and Model X

On May 13, during an annual investors conference, CATL announced that it will supply lithium iron phosphate (LFP) batteries to Tesla's Shanghai Gigafactory. This is the first tie CATL discloses in public any partnership with Tesla. CATL Chairman Cheung Yu-chin also said that cooperation with Tesla is not limited to its China operations. CATL uses the CTP technology which increases the battery cell to battery pack...

Tesla's new European Gigafactory in Grünheide in Brandenburg is scheduled to start production next year despite the coronavirus crisis. Economics Minister Jörg Steinbach (SPD) confirmed this on Wednesday during the Economic Committee of the Brandenburg State Parliament. "There is a clear statement by the Tesla European boss that the first cars should roll off the assembly line in 2021," said Steinbach. "The project...

According to industry insiders, LG Chem will source winding and stacking process equipment from Lead China for its Nanjing battery plant. These are used for cylindrical and pouch type battery production lines. The deal has been confirmed by both companies. Winding equipment is used to roll up cathode materials, separators, etc. in what is called a jelly roll. The jelly roll is put into a metal cylindrical case to...

Tesla has announced its Q42019 numbers for produced and delivered vehicles. The total production volume is almost 105,000 units and the deliveries mark another record - 112,000 units. For the entire 2019, Tesla has delivered approximately 367,500 vehicles, 50% more than the previous year and in line with its full-year guidance. The company has "demonstrated production run-rate capability of greater than 3,000 units...