Porsche Taycan is about to be unveiled on September 4th and it seems that it is in the final stages of testing and teasing up the audience. In line with Porsche's ambition ever since the Mission E concept to create an all-electric vehicle that is able to maintain continuous higher power, the company has shown in early August that the Taycann reach full power output even when accelerating multiple times in direct succession. In an initial test, a pre-series version of this 440 kW (600 PS) all-wheel-drive car accelerated from 0-200 km/h 26 times in succession.

Porsche has announced that the Taycan has undergone an even tougher endurance test. In 24 hours a pre-production vehicle covered a distance of exactly 3,425 kilometres as part of a test at the Nardò high-speed track in Italy. With peak temperatures of 42°C and a track temperature of up to 54°C, the speed was between 195 and 215 km/h.

Stefan Weckbach, Vice President Product Line Taycan, was delighted to report that "the Taycan mastered this ambitious endurance run without any problems," adding "the result achieved in Nardò highlights the advantages of the unique 800-volt technology and its high maturity level. Before the Taycan is launched on the market at the end of the year, we will have covered over six million test kilometres across the globe."

Porsche elaborates a bit on these endurance capabilities of the Taycan by giving more insight into the technologies it employs. For starters, the two PSM electric motors use the so-called hairpin winding, which increases power output and torque at the same level of volume. This is what Porsche referred to as "an electric motor with extremely high power density" when announcing the Mission E. Secondly, The Taycan is the first production vehicle with a system voltage of 800V which delivers continuous high power and charging capacities while reducing the high-voltage cabling weight. Finally, there's a sophisticated thermal management system. 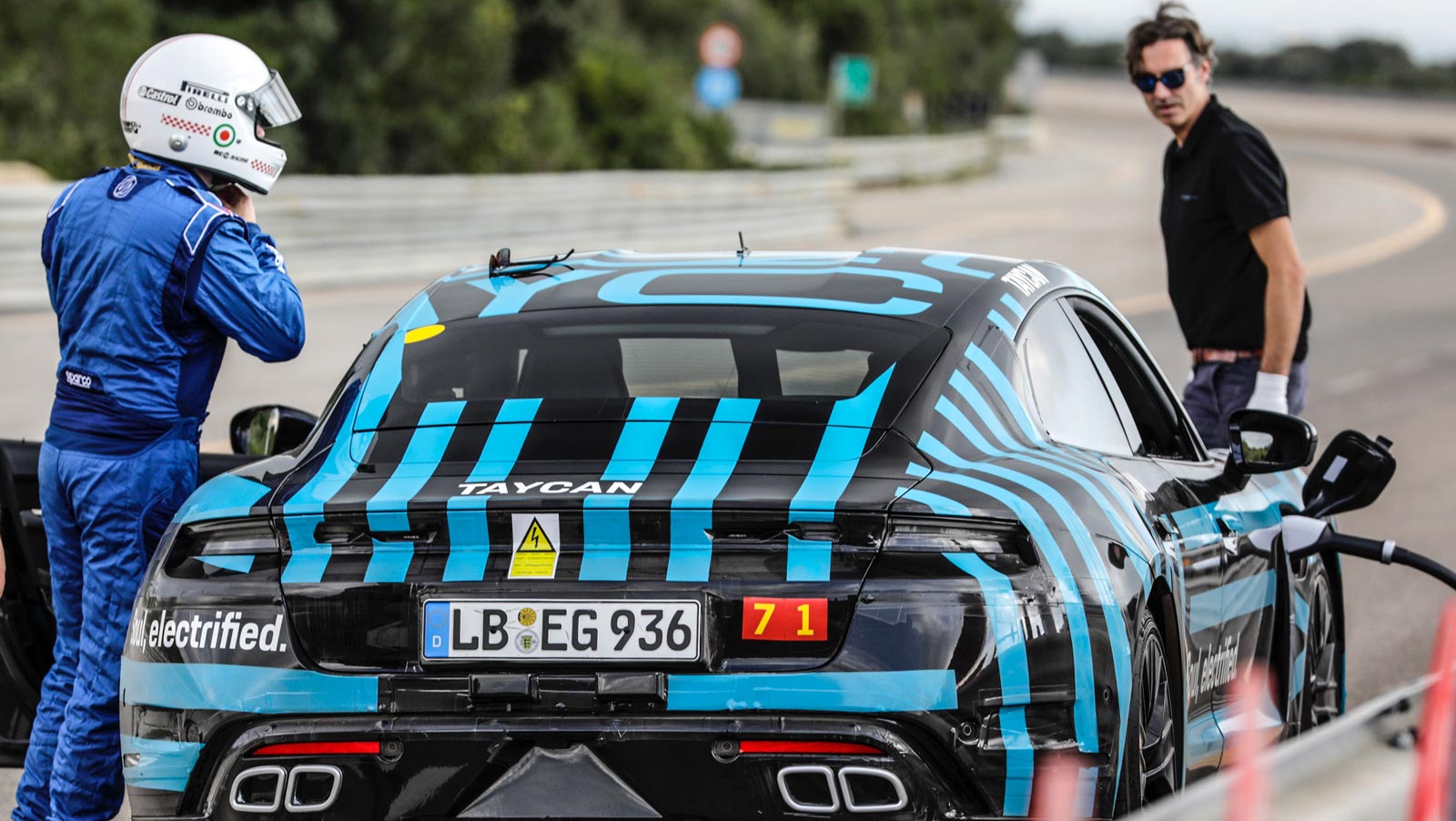 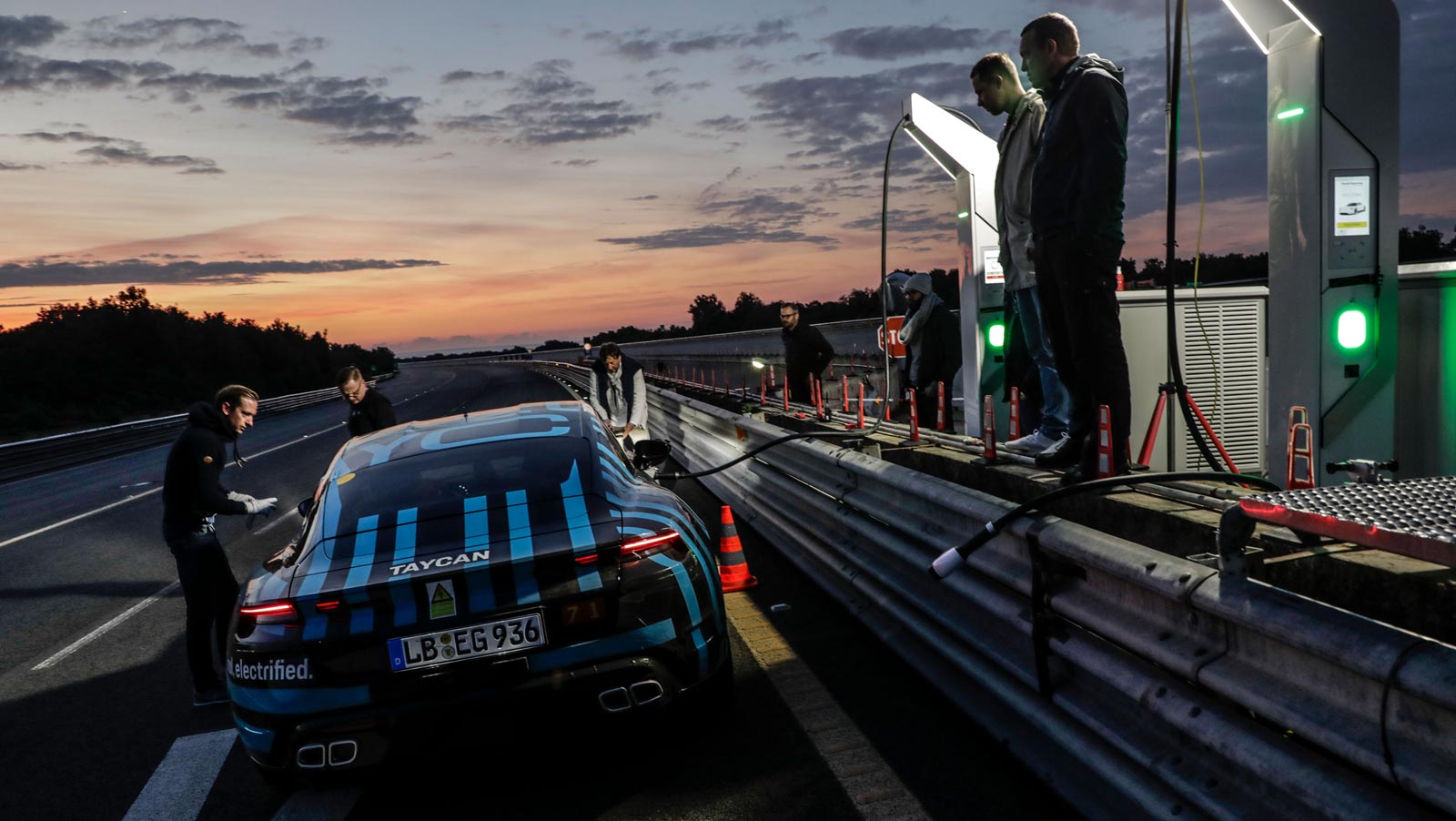 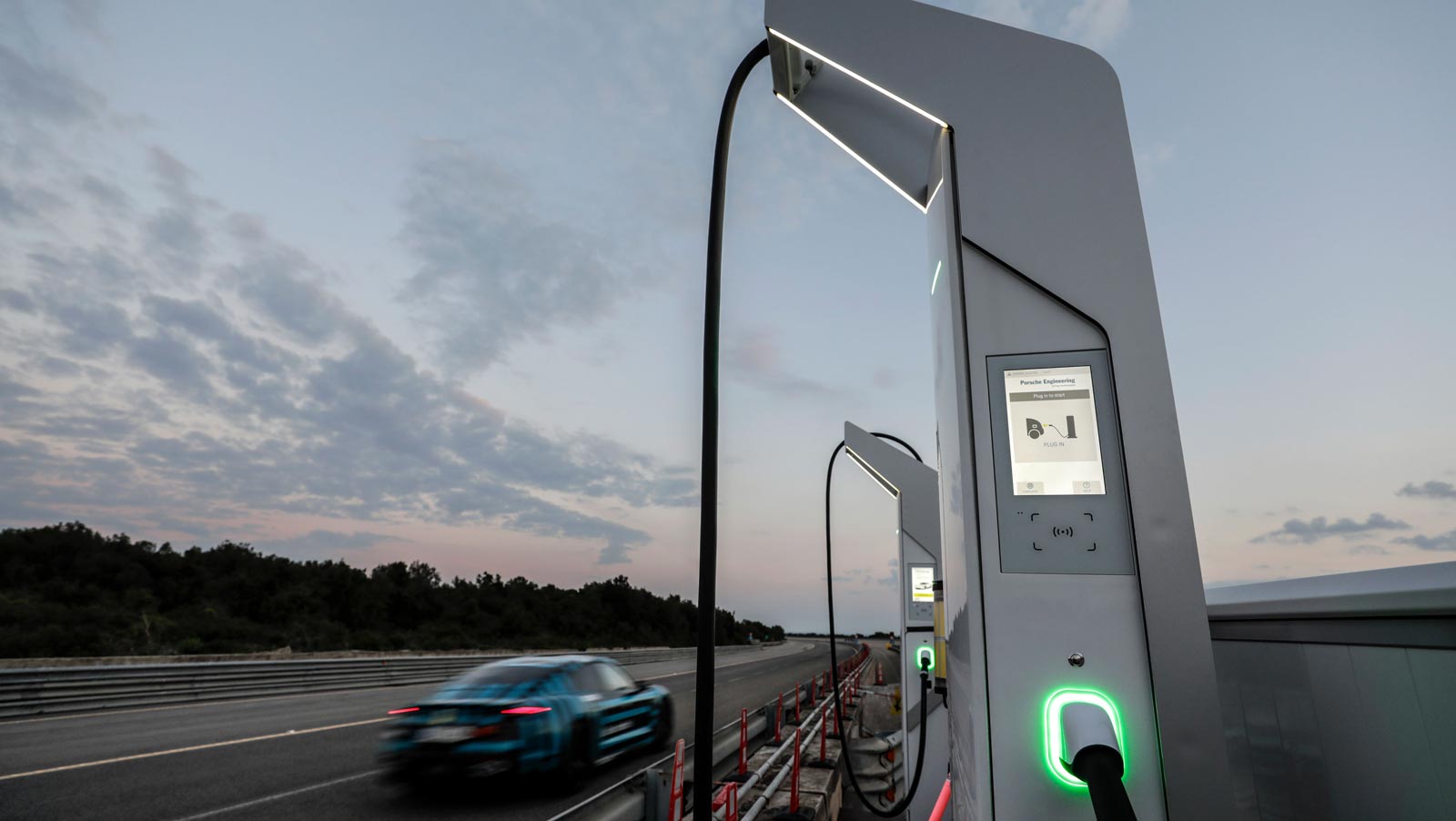 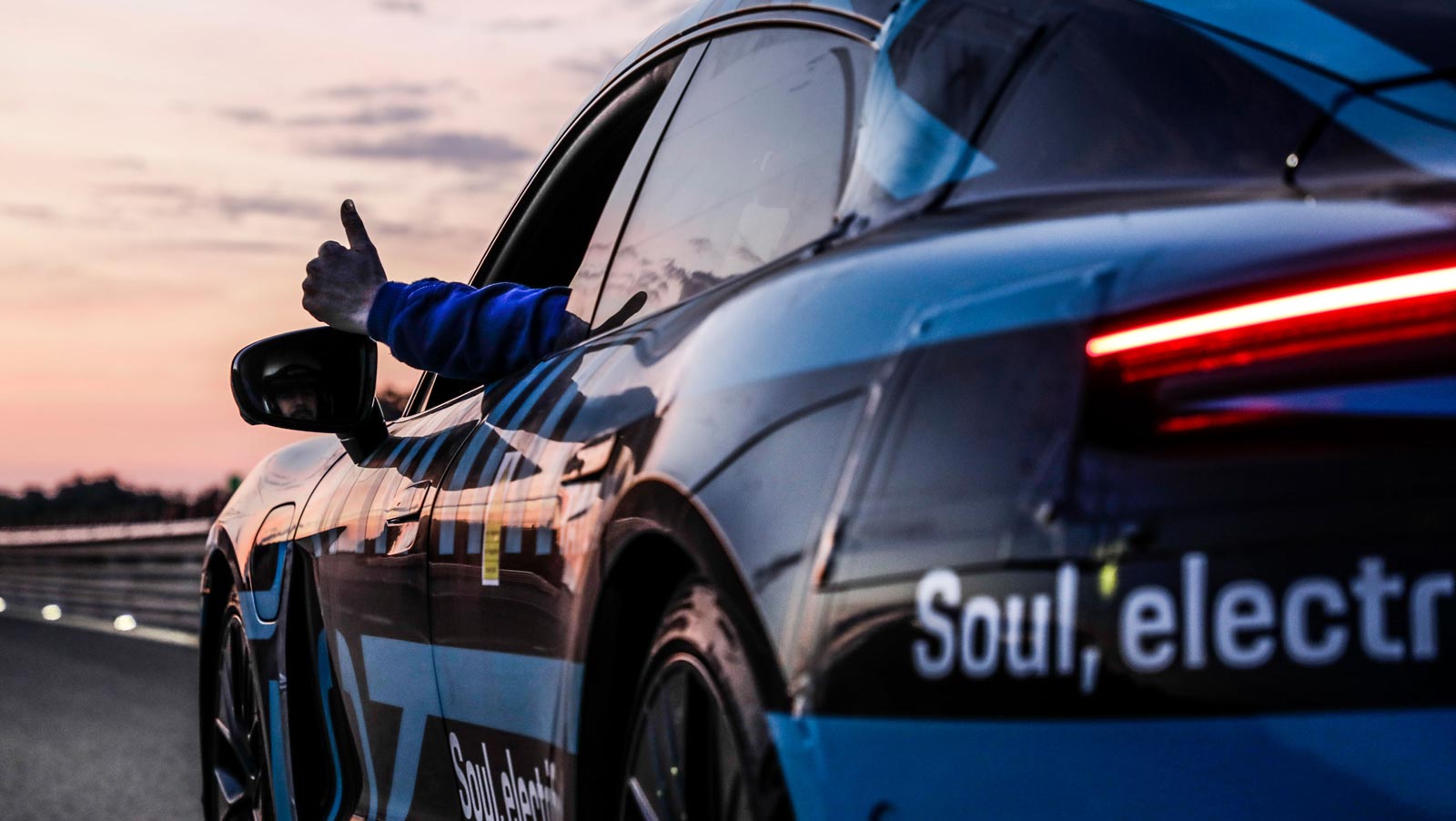 Porsche has launched in Leipzig Europe's most powerful rapid-charging park called Porsche Turbo Charging. The total capacity of the Saxon facility, which includes six internal quick charging points, is seven megawatts and it is operated entirely with electricity from renewable energy sources. It includes 12 DC charging points with 350 kW (DC) and 4 AC charging points with 22 kW. The current pilot phase is running...

Porsche has 10,000 sale contracts for the Taycan as part of more than 30,000 reservations

In an interview with the German newspaper Handelsblatt, Porsche's CEO Oliver Blume was quite optimistic for the company's future. In addition to creating 2,000 new jobs this year, the current smallest German automaker enjoyed a 7% increase in sales, and at 16.3%, Porsche has the highest return on sales in the industry. Mr Blume also expects that electric cars will account for a large part of its business. In this...

True to its naming nomenclature and launch policy, Porsche has launched the Taycan 4S. After announcing the top tier Taycan Turbo and Taycan Turbo S, it is the mid-range model's turn, in which the "4" means four-wheel-drive and "S" usually denotes the mid-level. The 4S accelerates from a standing start to 100 km/h in 4.0 seconds and the top speed is 250 km/h. The Porsche Taycan 4S is available in two variants...

Porsche increases its stake in Rimac to 15.5%

Porsche has announced that it has increased its stake in technology and sports car company Rimac Automobili to 15.5%. The latter focus on battery technology within the high-voltage segment, electric powertrains and developing digital interfaces between humans and machines (HMI). It produces electric bikes and has even announced an electric hypercar concept. This increase in investment from Porsche comes after a year...

The Porsche Taycan configurator with prices is launched, official photos of the exterior and interior

Porsche has launched the Porsche Taycan configurator online, which you may check out from the source link below. The lowest price for the Taycan Turbo is $143,000, and the highest is $241,500. While we gather all the correct specifications and details about the Taycan and the available trims to include them in our list of EV specifications, we have made a compilation of official Taycan photos, which you may enjoy...

Porsche Taycan is Porsche's first all-electric four-door sports car. It is powered by a 93.4 kWh liquid-cooled battery that is good for a WLTP range of 450 km on a single charge for the Taycan Turbo version and 412 km for the Turbo S variant. It contains 33 cell modules consisting of 12 individual cells each (396 in total). This is also the first car in the world with an 800 V system. Currently, the vehicle supports...

Today is definitely Porsche's day as long as it concerns the electric cars market. The brand will introduce its first all-electric vehicle as part of the IAA 2019 program and will showcase it at the 2019 Frankfort Motor Show next week. Porsche will live stream the event and you can watch it directly from the embedded video below, or, alternatively, hook into Porsche's newsroom from here. Meanwhile, you can check out...

The Tag Heuer Porsche Formula E will participate in the 2019/2020 season of the ABB FIA Formula E Championship with the Porsche 99X Electric. This happens two years after Porsche left Le Mans racing to focus on Formula E. The team welcomes another member from the Porsche family. Pascal Zurlinden, Director GT Factory Motorsport since 2018, will take on a key role in Formula E in addition to his role in GT works...

Porsche Taycan sets a record at the Nürburgring-Nordschleife

Today, Porsche shared some new information about the Taycan prior to its unveiling in September. It looks like the four-door, all-electric Taycan swished through the Nürburgring-Nordschleife track a.k.a. the Green Hell in 7 min and 42 sec. The track is 20.6 km long and the pre-series Taycan has been driven by Lars Kern. The Taycan is also suitable for race tracks and it convincingly proved that here on the world’s...